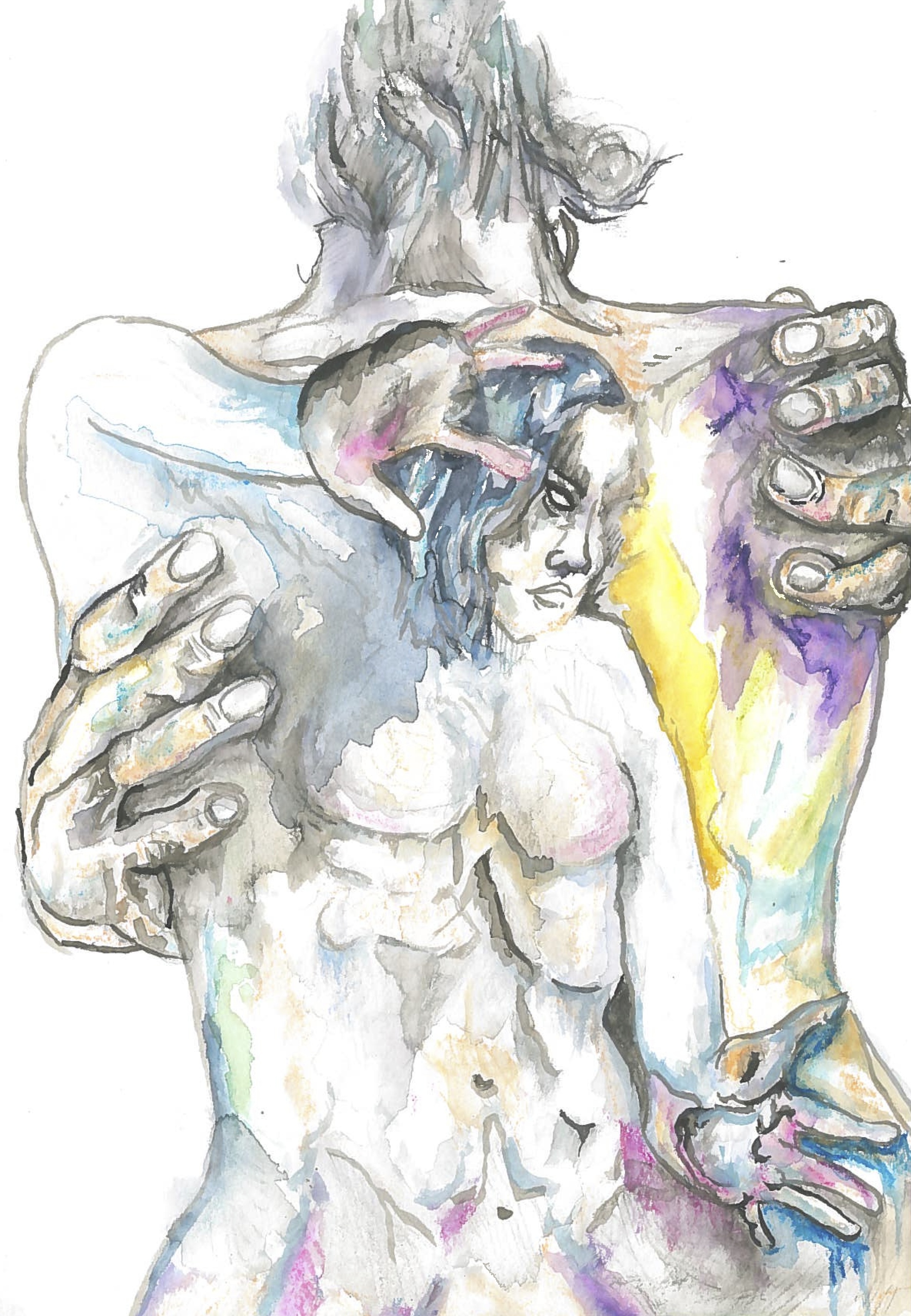 Cassie Jones, The Self I Hide Within Myself, 2018.

There are only a few bodies that I have touched fully and fumblingly: my mother’s as a baby drawn to the bare life that spills kindness, my twin’s as a faulty scanner realizing that meaning is not found in mirrors, my lingering lovers who have known that fingers loiter like summer horizons when undressing the lightness of being. I’ve hugged big bodies, mountains of men and women. I’ve stretched to bodies that have slipped away, that have asked for my palms to leave. And I have felt the bodies that whispered into a night that saw that this is what it was all about – to hold and be held, to love and be loved.

Sometimes in the steep silence after these uneven affairs, there are heartbeats. Small, tiny, little recurring things that cannot said to be, but are. There under your nail. There in my own now. They bumble braveness. They tickle familiar muscles and call like sunlit laughter. Against the unseen quiet, their sacredness spools out in a language older than language.

As a medical student, I translate this sound that gives reason for every other sound. I touch the strange yet similar skin of people who have had a lifetime before me, who may not have one after. I listen to their heart’s mumbling muteness, analyzing the notes of its music to destroy the song.
When I saw my first cardiovascular patient, she hummed one such ancient tune. She was old, arrayed in clothing full of flowers – on her sleeves, on her scarf, on her bobby pin – and she was going to die.
She knew the drill, she said. In the office no bigger than a generous closet, she took off the yellow dress sewn with pink lilacs and purple tulips. The curtain was closed, and the flowers were not disturbed by the momentary darkness. I could hear her still singing the old rock song that I could recognize but not name.

Meanwhile, the physician told me the case history. This is the most important, he stressed. History.
Emergency admission four weeks ago, generalized presentation, common case. But the blood pressure is low, so we’ll want to work on that. Then there is the pitting edema. And let’s not forget vascular atrophy. What else is a product of congested heart failure? Do we think the patient has right decompensation? Wrong. Left. And this causes? And the patient will suffer what? And what it is the worst prognosis? Good. Good. Excellent.

The curtain mouthed an apology for the interruption. Silence swallowed the office. The woman lay nearly naked in front of us, two males with their hands in their pockets. Her clothes wept on the empty chair, onto the floor.

We carried on, equipped with professionalism and raw routine. I moved my hands onto her, following her body that had known different days, that spoke a mess of every story that could be told if only given the time. The few remaining hairs on her were lighter than dreams. Her skin was coloured gray by the coming primal fog.

I touched her clavicle, walked my fingers to her shoulder. I looked at her distended jugular, made a rough approximation of her venous pressure. I placed my stumbling palms on her chest, on where I thought her heart was. Higher, the doctor said. The woman’s head fell slightly, slowly.
The blind regime of sentences dominated next. I blabbed: pulse pressure fine. Legs swollen. No cyanosis. No xanthelasma. No conjunctival pallor. Good, good, excellent.

But could this language really be mine? Me – the child of poetry, the arts grad who had written on the slippery danger of the mechanisation of medicine. What was I saying? Whose words were dangling in my mindless mouth?

Alongside the apex, why did I not instead ask of the happiest moment of her life? Among the maximum impact, should I not instead wonder about the mild evenings that cooed boredom and the shifting acceptance of loneliness? Were there not others who did this better, softer, who felt what I felt and what I couldn’t – the sorrow that hurt more than any disease, the kisses that came in all the beautiful spaces, the full coffees and misty waterfalls and the future of something different than this, something that she promised she would figure out one night alongside heavy books, ripened fruit, and where she was sure she was close to understanding what this whole thing was about only to find it forgotten with the dying day. What was I doing here? What was this tired, tortured thing?
Do not forget to listen to the heart, the doctor said.

The stethoscope held to my neck. My hands held onto it. I moved the metal to her chest, to the space where my fingers had left a small, disappearing imprint. At first, there was nothing. The impossibility of even less than that. Where there should be being, there wasn’t. In the absence of sound, I tried to remember the unnamed song she hummed earlier. Were the singers alive still? How did the chorus go, anyways?

Muffled, I heard the doctor apologize for taking so long, mention that it was my first time with this kind of procedure, and suggest to me that I should move yet higher again to the aortic valve for it would be the loudest, the clearest.

Chitchat poured. Heavy, whole discussions of her thick life came into my ear. Each note lapped on itself, a race finished and began in a single step. They sounded like stretching, like the triumphant roar from a yawn after a midday nap.

Her heart, those waters, that ocean. Yes, this was it. This was what was missed among the medical wreckage, among the question of whether such drowning sailors still adored the sea. It was more than it too. It was all that needed to be said. It was poetry and paragraphs. It was books and spines. It was a body of work spent not worrying about the good, whole sloppy business around. It was nature. It was universal. It was a single blade of grass standing at its full height to challenge the meadows, the trees, the entire sky. It was it was it was.

It is a grade four harsh systolic ejection murmur radiating outwards to the carotids with no change in inhalation.

Now you’ll have to be quicker for the next examination.

The patient sat still, waiting for instructions on what to do with her body, her life. The doctor told her. Medications, surgery unlikely, come back again when your legs get less large. Here, she asked. Here, he reaffirmed.

Weeks later when I came back to the clinic, she was not there. I asked how she was doing. The physician said she had passed. I tried to ask how, but another patient was coming in. They’re early, the doctor said to no one at all. 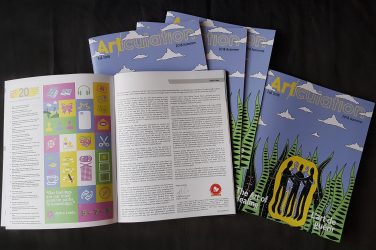 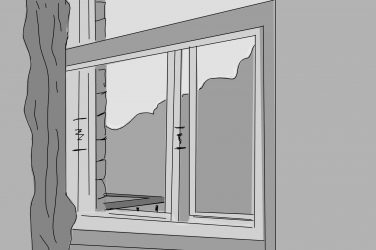 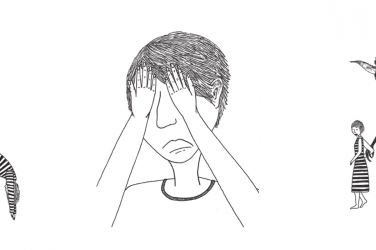 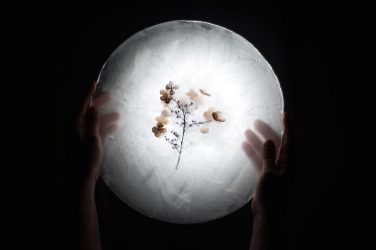 How many horcruxes do I have left? She-whose-name-will-inevitably-be-mispronounced Mischief and no longer a mistress ... 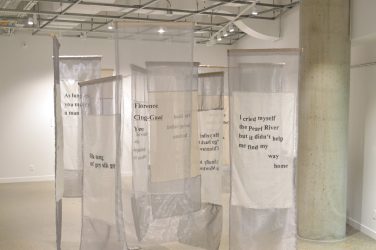 Selected Hauntings is a series of embroidered textile scrolls hung as a labyrinthian installation. ... 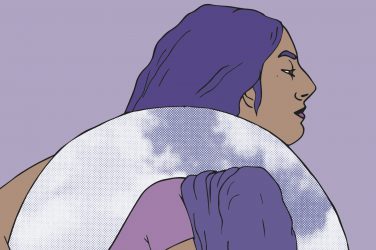