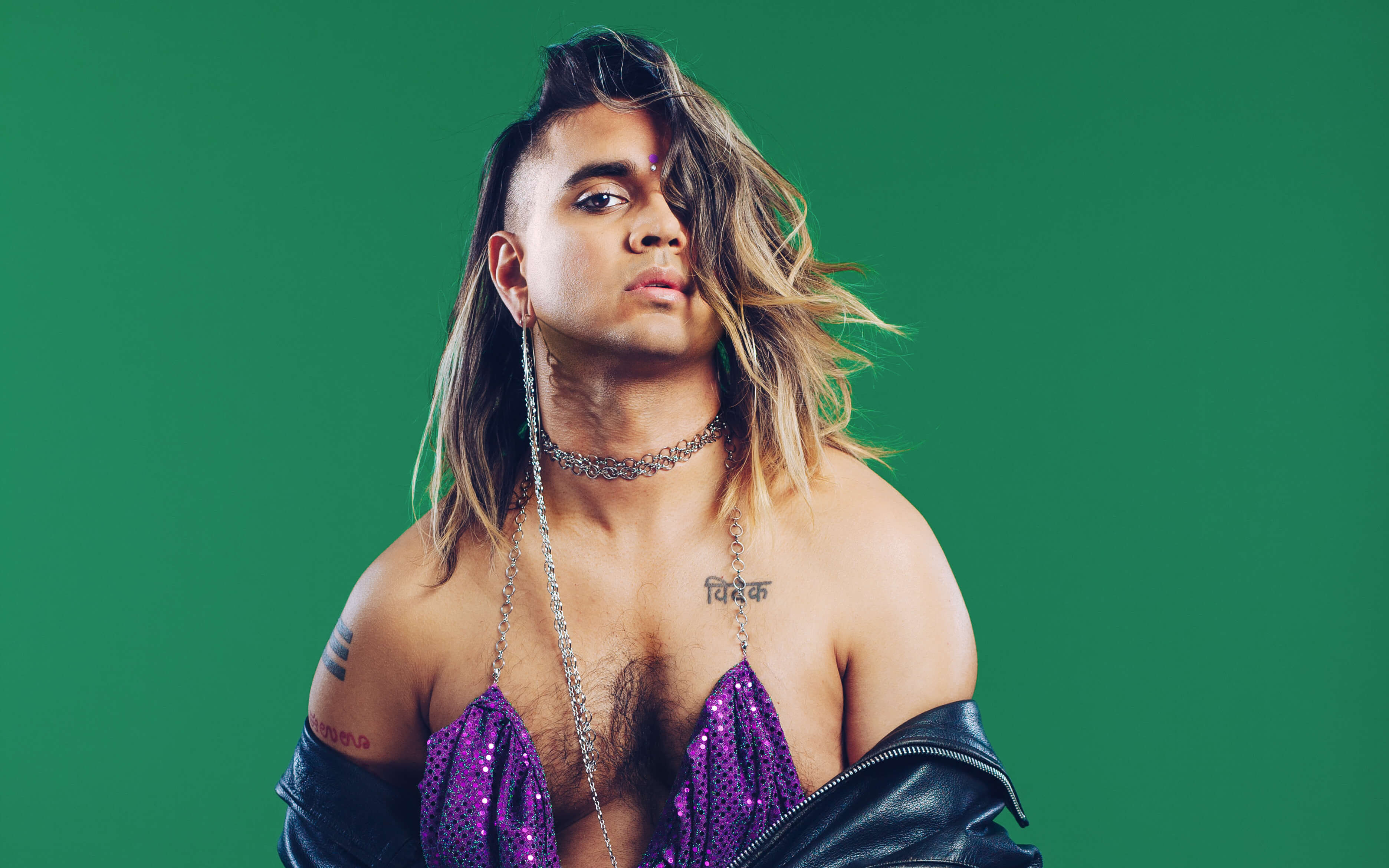 Vivek Shraya is an artist whose body of work crosses the boundaries of music, literature, visual art, and film. A Polaris Music Prize nominee and four-time Lambda Literary Award finalist, Shraya was a 2016 Pride Toronto Grand Marshal, and has received honours from The Writers’ Trust of Canada and CBC’s Canada Reads. She is currently a director on the board of the Tegan and Sara Foundation and an Assistant Professor of Creative Writing at the University of Calgary.

Vincent Mousseau: Thank you for speaking with me. While reflecting on the theme of this issue, our editorial team immediately thought of you and your work. How do you connect with the idea of art as a means of healing?

Vivek Shraya: A lot of my art has been connected to healing from teenage trauma and has consistently aimed to work through pain and to restore. Of course, ideally I hope to make art that is also healing for people in my communities, whether that’s queer people, trans people, people of colour, or anyone else.

As a fellow queer and trans person of colour, I see myself and my identities reflected a lot in your work. Do you often find yourself thinking about the effect of your work on folks who are living through similar situations?

Absolutely. One of my biggest motivators as an artist is thinking about being that 16 year-old Brown, queer, gender-creative kid in Edmonton. What kind of art would they have needed growing up? Broadly, a lot of my art is tied into a desire of wanting to speak directly to communities that aren’t necessarily spoken to or represented by mainstream media: in music, in books, in film. My brother and I are in a band called Too Attached, and we made an album this year called Angry, which is a celebration of POC rage. My motivation for that album stemmed from thinking about the ways in which people of colour and queer people often have to imagine ourselves in pop songs; pop songs are seldom written for or about us. One of the songs on the album is called “Love is Not Love”, which is meant to push back at the phrase “Love is Love” that is often used in the community and by allies. For me, it’s exciting to think about a queer person being at one of our shows or listening to our album and thinking, “this song is for me,” instead of having to imagine themselves in it.

You mentioned your band and you also recently wrote your fifth book, I’m Afraid of Men. It’s clear that you don’t limit yourself to one medium. How do you decide which medium to use and when?

My choice of medium is often dictated by an idea, or a phrase, or an injustice, as opposed to starting with the medium and working from there. I try to make art that challenges white supremacy and speaks to the specificity of systemic racism. But that is an experience that is hard to articulate sometimes. It’s then about figuring out what medium would best make that visible. That’s how I ended up coming to poetry, eventually leading me to write Even This Page is White. I felt as though poetry was a really effective way to ask really hard questions without necessarily needing to provide answers. With poetry, you can be very direct, but you can also be a bit more invasive as well. Poetry just gave me a lot of freedom. It’s one of many examples.

This is something that you do in depth in I’m Afraid of Men. Its an extremely sensitive and poignant look into your everyday life and the realities that you face as a queer and trans person of colour. I can only imagine how difficult the decision must have been to expose your reality in such a vulnerable way. Can you tell us a bit more about what inspired you to write it?

I’m Afraid of Men was an important gesture in complicating the dominant narrative around masculinity that has been taking place publicly for the past year or so. These conversations have largely been led by white women, whose voices were heard the loudest. The voices of trans people, queer people, people of colour; these voices were not really centred in any of those conversations.

I think that conversations about masculinity needs to be complicated: they need to be broad, they need to consider the ways that we are all complicit [in enabling toxic masculinity] regardless of the forms of oppression we might’ve experienced. So I’m Afraid of Men felt like an opportunity to come at the conversation around masculinity from a trans feminine, queer, and racialized perspective.

The number one question that I get about the book is whether it was healing or cathartic to write. I’ve been thinking a lot about this question because I think that there’s something about audiences or readers encountering a painful personal narrative that makes them want to believe that it was cathartic or healing to write. I don’t know if that’s because the reader feels better about what they’ve engaged in if they feel like it’s a transaction in which the author got something as well; if the author was healed. I’ve been pushing back against this because the truth is, I don’t feel healed from writing this book. It wasn’t a cathartic experience. It was actually very painful. It’s not like I can just write a book called “I’m Afraid of Men,” then suddenly I’m fearless. I have to continue to live my life in a world that’s transphobic and misogynistic and racist. So fear persists.

The idea of living in fear seems to tie in to your upcoming project, Death Threat, How do you think that this new project ties in with your other work?

In a lot of ways, Death Threat is the completion of a circle or a loop that began with a project I put out last year called I Want to Kill Myself, which is a short film that navigates me thinking about suicide throughout my life. One of the hardest things for me in making that film was not wanting to fall into the trap of pathologizing transness, queerness, or Brownness, because that is so often the connection made in mental health conversations. It’s like, “queer people suffer from depression”. Sure, we suffer from depression, but that is because we live in a homophobic world. And so for me, Death Threat, sort of completes the scenario because it highlights how my desire to die is inherently and explicitly tied to the fact that I live in a world where people want me to die.

While I’ve been promoting I’m Afraid of Men, I’ve simultaneously been receiving hateful messages from men. Trolling is almost seen as a byproduct of being visible—or of being online more generally—so it’s not really taken seriously. Death Threat is an opportunity for me to push back against that idea, and to point out how serious of an issue this is.

We have to find ways within our communities to support each other. In some ways, it’s easier for me to enter mainstream white, cis, and straight spaces and talk about I’m Afraid of Men than it is for me to have these conversations with other racialized, trans, and queer people because of the ways that we internalize our experiences of racism and misogyny and end up taking it out on each other. The only way that we survive is by finding ways to resist the training we have internalized that encourages us to be cruel to each other. That’s not to say that criticism and accountability aren’t important, but sometimes they’re is wielded to inflict pain on fellow community members. We have to find ways to hold each other up, to celebrate and to nurture each other.

If we use art to move toward healing, the implication is that we have hope for the future. In a time that is politically divisive, with rising tides of white nationalism and other movements that challenge our very existence, how do you keep a flame of hope alive?

Alok Vaid-Menon, who I admire a lot, has this quote that I often think about: “I do not believe we will win. I do not believe hope should be a prerequisite for trying anyway”. That really summarizes how I feel about hope. I don’t know whether or not I am hopeful. But getting up in the morning and making art—as a means to try, as a means to connect, and as a means to challenge—feels like all I can do. I am committed to the work even if I don’t believe that things are going to get dramatically better. 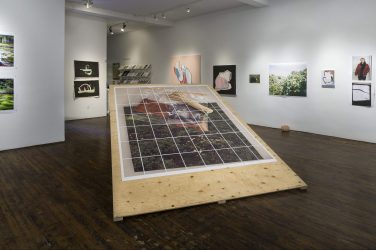 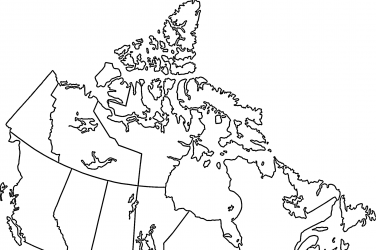 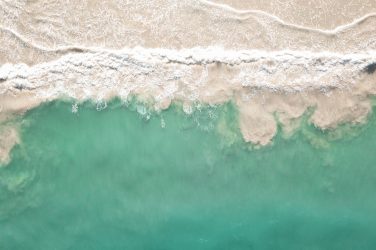 I unfold on blank sheets of paper When the sheets of my mind are ...